really bummed that i didn't get the august tag done in time to submit it for a chance to win :( but there was no way i could start on the september tag until the august one was done! since i am submitting the september one on time i will show that one first:


when i saw tim's tag i was sooooo excited to try the "metal" theme. 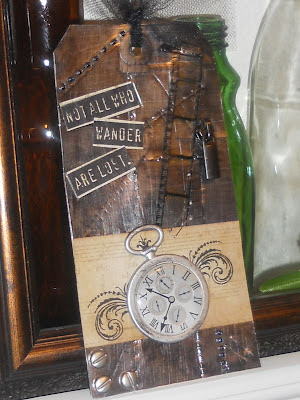 i do not have the same self adhesive metallic paper as tim but i do have metallic cardstock and it worked really well. i also only have a few bright alcohol inks which i considered using but i wanted this to have a darker feel so i smeared black and brown staz-on ink all over and buffed it with my craft towel. then i scraped it all up with a wire brush. some of the embellishments include an old zipper that came off one of my bf's shirts and also some little black beads that i glued onto some of the "rivets". 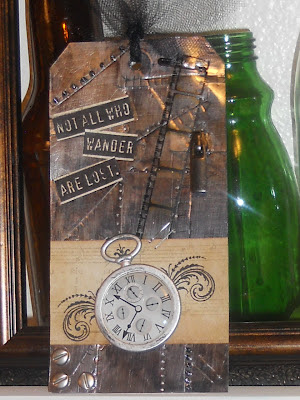 i also love the film strip ribbon and the little pocket watch. these were both things i found on a spontaneous trip to spokane. i tied the top with black tulle and called it good! 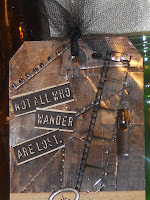 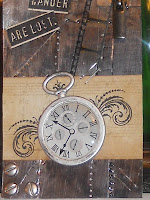 check out tim's september tag here
~AUGUST TAG~
i knew what i wanted to make for my version of this tag but just didn't get it done in time. too bad because it is one of my favorites. 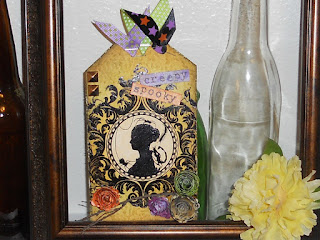 the big thing with this one was a silhouette and a frame which i conventiently had in a halloween stack. i dry embossed the tag all around the frame and even though the image itself was already raised  i colored in the silhouette with an embossing marker and covered it with clear powder to heat set it. this made it look less smooth and 'perfect' which is perfect for what i wanted! 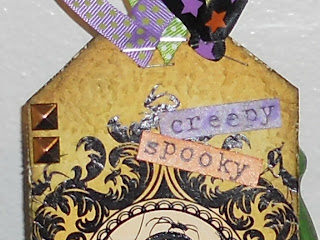 i colored some strips of paper with distress ink to match the spiral flowers and added some metal studs and a real stick. to finish everything off i stapled some halloween-ish ribbon to the top. 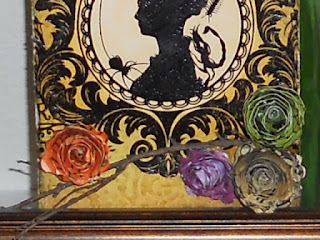 check out tim's august tag here
Posted by Rachelle at 1:02 AM

Rachelle
i love my husband (oh, I love saying I have a husband!), my pets, and my family. i love helping those in need (especially those with paws). i love snacking and pepsi, creating with paper, reading and writing. i love memories and making sure they are documented. i love sunshine, naps, movies, and christmas. i am a crafter, organizer, vegetarian, and animal lover. i am a dreamer and a believer. i am an {amazing} wife, or so i am told! i am spontaneous and crazy. i am more than you think. i am HAPPY<3

Interested in anything you see? Visit my Etsy shop! Contact me for inquiries and custom orders. I look forward to hearing from you! 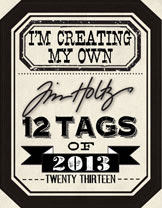